Mining & Resources: Behind The Political Rhetoric 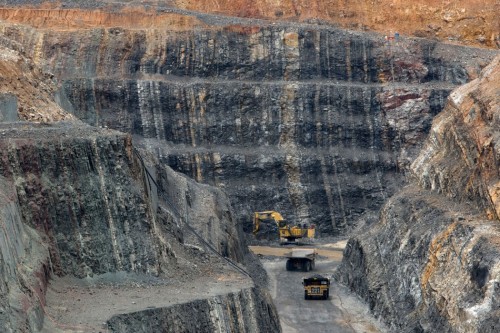 From Queensland Mining and Energy Journal

Can Australia be ‘open for business’ and more strategic about the extraction and use of it’s resources at the same time? And does it really need to limit public scrutiny and make mining protections and applications easier to get through? Mining and resource extraction is absolutely essential to our industrial society. However the mining sector is powerful and influences government in ways that distort good economic and social policy.

It’s Transient:  Use public transport or a smart phone and you’re using a multitude of mined products. It takes a lot of money to do and a lot of money is made. Also keep in mind that all mining and resource extraction is transient though some projects are more transient than others. In any location it comes and it goes. It’s important when considering any project e.g. coal seam gas (CSG) extraction with it’s thousands of transient sites (4,489 Queensland sites in 2011) and environmental and social impacts. Income from any particular CSG site is relatively short lived 5 to 20 years.

Hidden Costs and Industry Strategy: Besides the potential to leave behind a very expensive ecological mess, mining is particularly subject to booms that can distract a society (local and national) and an economy from more sustainable enterprises. The mining boom ripped workers out of jobs in other sectors, inflated wage costs for others and decimated the fabric of local communities. None of these costs have been counted. Very clever mining bosses like former BHP Billiton CEO Marius Kloppers easily get caught up in these booms while becoming independently wealthy (his exit payment for 6 years work was $75million). Following the boom there are busts and the potential to leave behind very expensive (and underfunded) social and environmental messes – more on this soon. Ask Andrew Mackenzie, the BHP Billiton CEO after Kloppers was asked to retire about the messes left behind? Advanced economies have choices and need not pursue mining and resource extraction at the expense of other industry sectors particularly when the speed of the expansion indicates a boom/bubble. That is, governments need not pursue policies that exaggerate the boom and bust cycle and it’s social and environmental costs. Being somewhat strategic about the available mining resource and the sector is neither being protectionist nor anti- investment.

Greenies Don’t Seem To Stop Much! Australians are encouraged to worry that mines will be rejected on environmental (and other) grounds, that some if not all mining will go to other countries putting the economy at risk. This happens pretty rarely  – since 2000 about 2.2% of mining applications are rejected and under 1% of resource projects have been vetoed. Intuitively it could be expected that more mines might be rejected despite vetting by the companies before applications are made.

Mining companies complain in part because approvals are not cheap and tend to move some of the environmental risk and cost to the front end of the project as well as to the operations of a project. I guess they would rather manage the operational risks and shift the costs to after the project is finished. Once a project is finished then there are several means by which the environmental costs can be deferred, avoided or transferred to the public purse. It may be financially painful for a mining resource company to work to higher environmental standards however it reduces social and environmental risks and probably reflects something closer to the real cost of any project.

I don’t have good numbers for Australia but to illustrate the transient nature of mining and it’s legacy, a good 2001 report from the US (S. Buck & D. Gerard, Cleaning Up Mining Waste. Political Economy Research Centre, 2001) catalogued the unfunded mining cleanups for 32 states. Note this is a logarithmic scale because the 14,900 contaminations and 52 extreme nasty mines easily disappear on a graph with 557,672 abandoned mines represented. Just over 65% of the mines (many abandoned a long time) still represent a unfunded community liability. 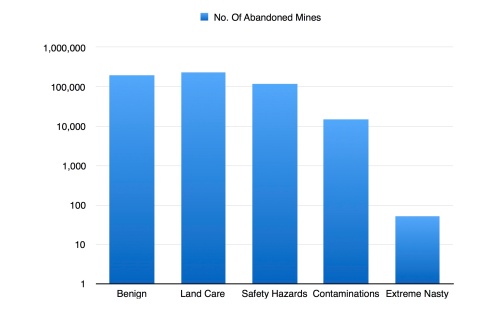 In trying to look past political rhetoric about mining I’ve only dipped my toe in the water however it would appear that no Australian political party in power has given mining and resource companies an overly hard time regarding approvals. I am certain that approval times and questioning can vary however the outcome is still overwhelmingly ‘approved’.

The approval rate actually suggests the governments of all persuasions are very motivated to get approvals, to the extent that if there are significant hold ups then the public and not just green groups should be very interested as to why. The Central Queensland Carmichael Mine touted to be the largest coal mine on the globe is a good example. Here there are series of hold ups but also serious governance (Adani has significant relevant operational and reputation problems), financial (can it even be viable and attract funding) and environmental issues (water and Great Barrier Reef) regarding the mine and associated rail and port infrastructure. Public suspicion and close scrutiny of the project is warranted. Regardless, projects like the Carmichael Mine have such big dollars attached that politicians will view it as a solution to economic malaise and the thousands of un/under-employed construction workers left after the mining construction boom. Growing small and medium size businesses doesn’t give politicians obvious big figure job growth headlines like a new project does.

Despite there not being a problem with ‘approval’ rates, conservative politicians seem very motivated to have lower barriers to mining access. They are using difficulties with the Carmichael mine to propose weakening public input and protections on applications. While to some of the legal points holding any mine application up can seem nit-picky and minor technicalities (e.g. saving a small frog or bird population) they are often all that is left as more obvious and pressing concerns are often waved away in application documents as engineering problems to be solved e.g. dumping dredge spoil near reefs or stopping groundwater contamination. Weakening standards cannot have any significant impact on approval rates that are already so high. Thus lowering costs and increasing risks would seem the two most likely payoffs for miners. History (see the above referenced report) suggests that the risk if realised will likely be hidden or eventually be a deferred cost for the public purse.

(I have purposely not getting into the position of the coal industry and climate change initiates as the intention was to consider mining and resources generally. These are connected discussions for another time. )

Developing Countries Will Get The Mines: You can hear the cry, “If we don’t supply the coal then somebody else will!” Possibly true however that doesn’t mean you go after bad business. While upfront costs and environmental and safety standards will be lower in developing economies this is no reason to move to lessen the standards in developed economies and reflecting the real costs and environmental risks. Rather there is a case for improving the standards in developing countries to better reflect the real direct, social and environmental costs to these communities. The Samarco  (Vale & BHP Billiton) Ok Tedi environmental mine disaster (BHP & Ok Tedi Mining Company) can act as an examples and suggest that mining executives do not learn easily.

It seems politically unthinkable, though probably wise, to hold up or delay a mine on national economic interests when the mining sector is inflated such that it is distorting the economy and even the workforce. Of course politicians would be scared of doing this as it would be presented as anti-market despite a seller of resources (the government) having the right to release the resource strategically for long term market and social advantage. That mining and resources held up some of the Australian economy during the GFC will also be used as a rhetorical argument. As always there are counter-arguments however that’s for another time.

# Similar to governments staggering timing of infrastructure projects so as not to inflate construction costs for all sectors. Something that is difficult across states.

@It seems possible the delays in the Carmichael Mine approval have inadvertently benefited the company as industry conditions begin to improve.

One response to “Mining & Resources: Behind The Political Rhetoric”