Science #4, The Prime Minister & ‘The Fixer’ 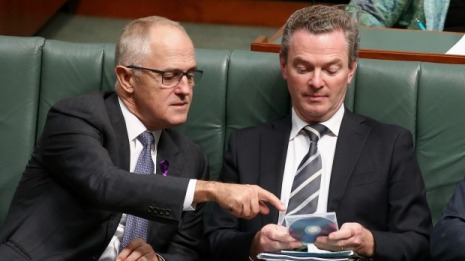 Malcolm explains to Christopher what you can do with a disc.

Australia has a new Prime Minister, Malcolm Turnbull.  Turnbull shows signs of being a political progressive and not at all technologically and science phobic. The later being defining platforms for the previous right wing, conservative Prime Minister, Tony Abbott. Under Abbott the University sector and relations with business remained in their kind of stagnant, patronising limbo. That is, we know we need an education system and some science, particularly if it serves business however, we really want you all to be compliant and not change things too much or challenge the values, status, power and wealth growth of those that already have it. This is not a formula for a happy, entrepreneurial and prosperous Australian future.

Turnball’s attitude might be on the right track and with an investment banker background he might have insights into how to get science and innovation moving in the economy. That’s good despite his being a banker! However, the question now is whether Turnbull can move past the corrosive influence of his own party’s stodgy, conservative wing and win the politics. His first move was to appoint Christopher Pyne to the science portfolio as the Minister for Industry, Innovation and Science. Guess what, he is a lawyer and professional politician (see Science #1.  With his stated priority being to party and power (see Kitchen Cabinet, Series 1 Episode 1 – no link available) before policy and progress, we are not off to a winning start. Coupled with his unsatisfactory time trying to deregulate University fees as Minister for Education & Training, the best we might hope for is that he gets out of the way or finds himself some people that can drive the cultural changes required to build the necessary relations, culture, funding and resources. It is of course not entirely his responsibility. Australia’s seed funding, venture capital and investment (and Superannuation/Pension Funds) industry along with the banks is either disinterested, too small or not structured and flexible enough to build a truly innovative business and science based economy. And I can’t see them doing anything about it. (Young scientists and entrepreneurs don’t often have homes to use as security for a bank loan and even if they did it would not be enough.)

I am hoping we make some real progress and I am okay if the ever cheerful ‘fixer’, Christopher Pyne takes responsibility.