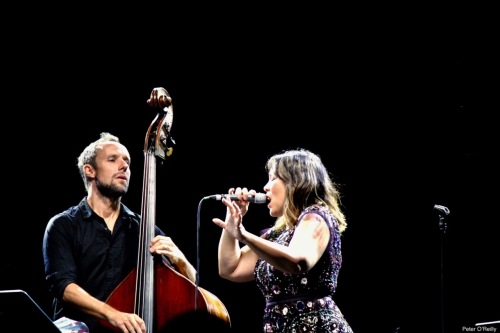 Kate Ceberano in concert has almost nothing to do with this article however you can bet both the wonderful bassist and Kate have had a lot of coaching and performance opportunities. And I just loved their performance and the photo.

Coaching and counselling opportunities have provided both professional highlights and disappointments. Some opportunities were specifically commissioned while others just occurred within or around ongoing consulting work. Early cases that motivated and changed me were mainly the second type and usually when there was sufficient time. The following is one of the earliest I remember well. I was involved in a restructuring initiative and temporarily had line responsibility.

Rod was mid to late twenties in a clerical administrative role working in an investment organisation. He was sharp, sarcastic, wary of the executives and labeled by those executives as disrespectful, rude, lazy etcetera. He was also articulate, insightful, well read andas it turned out had a rich life outside of work. Rod was studying Economics part-time though his relations with managers was at such a point that they were unaware and interpreted his early leave from work and other time watching as simple evidence he didn’t want to be there. He was also philanthropical with some young artists in his social circle providing them with materials while occasionally receiving some art in return. There was more, however the point was that his private life attributes simply didn’t reflect his work life. They seemed different people. It turned out he was well aware of this and acutely felt the lack of integrity about his work life. He felt stuck in a rut and lacked confidence to move on. He didn’t like himself for that. Rod actually wanted and needed more stimulation, challenges and responsibility. He was a bit like the classic super bright under-achiever causing disruption in the classroom. Once we uncovered some of this getting  a manager to take a chance giving Rod more responsibility and challenge became the hurdle. Fortunately for us both I took temporary line responsibility for Rod’s section when the manager moved on. A new computer system linking trading and settlements became the opportunity though he still had to prove himself. Training came first and then some incremental steps with increasinfg responsibility. Cutting a long story short Rod with training flowered in a new role and excelled all expectations. He needed some help but people were increasingly willing to give it. Unfortunately for the organisation after two years Rod was offered similar work in London and took it. Regardless it was a good outcome for Rod and the businesses involved.

Some of what I learned was possibly self-evident however it included:

There is more I have learned from this case however that only happened on reflection about other cases and situations … and some did not go so well. If you a coach that doesn’t acknowledge failures along the way then they are not sharing the truth with you.